Destructive floods ravaged many parts of Sri Lanka in January and February 2011 leaving 43 people dead and over a million displaced. The majority of the displaced were accommodated in camps set up by the government, whilst many others took shelter with friends and relatives, temples and churches. As the floodwaters began to recede, the displaced persons returned home, but many found that their houses, schools and belongings had been severely affected by the floods.

The John Keells Group initiated the John Keells Flood Relief Initiative to provide both emergency and short term assistance to those affected. In the immediate aftermath of the floods, the Group committed a significant contribution to airlift cooked food to welfare centres in affected areas. The Group businesses located in the affected areas were also involved in distributing cooked food, dry rations and other essential relief directly to affected families in their respective areas.

Meanwhile, the Group’s CSR arm - John Keells Foundation (JKF) - initiated a programme primarily aimed at involving the participation of Group staff. JKF sought the cooperation of the Group’s businesses in affected areas towards identifying beneficiary groups and nature of aid to be distributed as well as to distribute the relief items directly to affected persons.

The Group employees also responded to JKF’s appeal for assistance in packaging of the school kits and family packs. Staff members worked on a voluntary, rostered basis to package the material at the Keells Hotels Management Services Central Purchasing Office (CPO) warehouse located in Colombo 02 and load them for dispatch to Habarana and Trincomalee. The CPO management and staff rendered yeoman service in coordinating the sourcing and packing operations. Group Company JayKay Marketing (Pvt) Ltd supported the initiative in supplying 100 packs of dry rations packs, each comprising 2-weeks’ supplies for a family of four.

The distribution of relief items in the flood-ravaged Trincomalee District was undertaken by the management and staff of John Keells Group Resort Chaaya Blu, Trincomalee in cooperation with the Zonal Education Offices of the affected areas. 400 affected students were provided school packs at T/As Safa Vidyalayam, in Kinniya. whilst educational material was also distributed among 600 students in four schools in the Muttur area – namely, T/Sirimurugan Vidyalaya, T/Sampur Maha Vidyalaya, T/Sinhala Maha Vidyalaya and T/Al Mina Vidyalaya. With most of the area being at least 3 feet underwater, the flood relief came at a truly opportune moment and brought some consolation to the hundreds of children who had lost their precious school requirements.

Meanwhile, the John Keells Flood Relief Initiative in the North Central Province was supported by Group Resorts Cinnamon Lodge and Chaaya Village in Habarana which facilitated the distribution of relief items in the areas of Palugaswewa and Halmillawe in collaboration with the Divisional Secretary, Palugaswewa. A total of 100 dry ration packs were distributed directly to displaced families in welfare centres in Madawala and Maha Rambawewa, Maha Meegaswewa and Halmillawe.

Apart from its numerous sustainable development initiatives, supporting its fellow citizens in their hour of need has been a vital aspect of the John Keells Group’s culture over the years. The John Keells Flood Relief Initiative exemplifies the commitment of the Group and its employees to the cause of disaster relief. 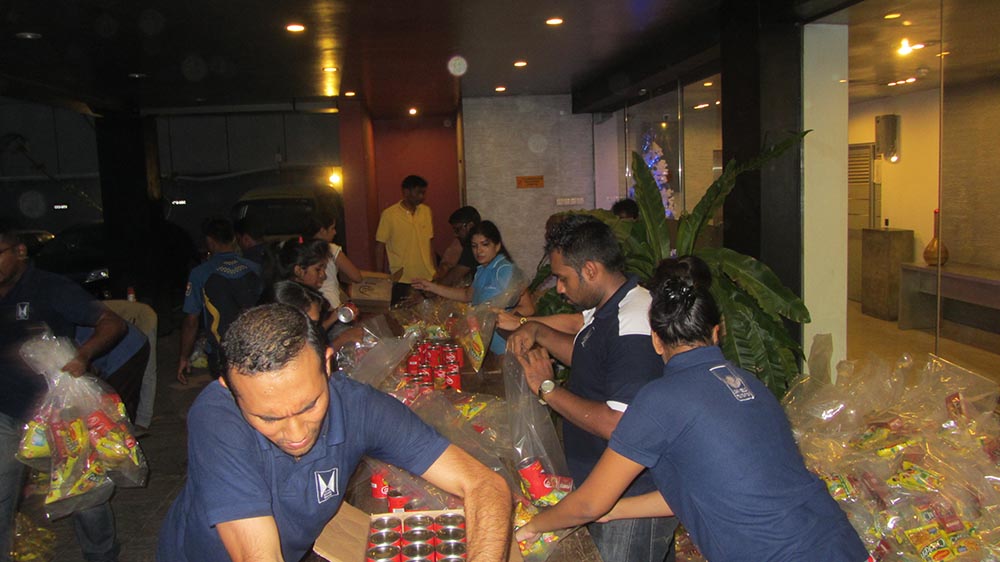